When we play, we must realize, before anything else, that we are out to make money.
David Sklansky
The table was quiet except for the tick of the clock. Everyone's eyes were looking at me as I plinked the chips into the pot, "I call," I said quietly. Sixty million isk sat in the middle of the table, and more than a few people had enough money in that they'd seen it through to now.

"Pocket Aces beat Pocket Kings," I said with a smile, "Thank you very much,"

"Fuck you, you lucky prick," Came a voice from across the table as I stood up.

I nodded to the dealer who counted the chips before making a deposit in my account.

"Hallan?" I had only barely settled into my pod when NOIR.'s voice comms came alive, "We've got a few targets in a wormhole, interested?"

"I'm in my Stealth Bomber, will that do?"

I undocked and entered warp. After a few jumps, I warped to my fleet, already assembled at the wormhole.

"Ok," I heard moments after landing, "I've got 'em, warp to me. There's another wormhole here,"

I flung my ship into the wormhole and entered into warp. The entire fleet moved through space in formation and we landed on a Scorpion. Our heavy interdictor went through and bubbled the other side. There was no getting away for our target. 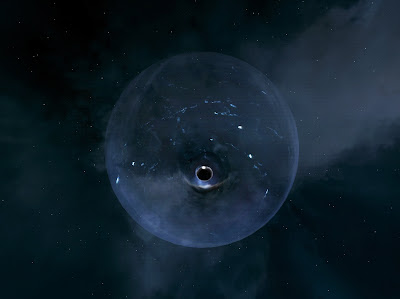 It's Watching You.
I was over fifty kilometers away and began to lock the Scorpion. As my targeting resolved, my target painter, range damps and torp's came alive. Just as he entered structure, a Drake landed as well. The Scorpion exploded and we turned our attentions to the Drake just as the Scorpion's pilot died.

The Drake didn't last long, but as we finally bit into his armor, a Typhoon landed. I let a small laugh be heard on comms as our interceptor pointed it. One of my torpedo volleys ripped hard into the Drake, and suddenly it was no more. We then turned our attention to the Typhoon.

It went down, quickly, and we took the time to take down his escape pod. After clean up, I warped back to the other wormhole.

"Real quick, who's the Manticore on scan?" voice comms chimed for a moment.

Posted by Hallan Turrek at 1:32 AM

Email ThisBlogThis!Share to TwitterShare to FacebookShare to Pinterest
Labels: poker