You don't stand a chance
against my prayers
You don't stand a chance
against my love
They outlawed the Ghost Dance
but we shall live again,
we shall live again
Robbie Robertson - Ghost Dance
I intend to make this a basic guide to taking moons, and turning it into profit using complex reactions. I intend to take you from start to finish in making Sylramic Fibers. Lets get started.

First of all, I've done the hardest part for you. I've picked out something for you to produce. If you didn't know yet, you'd want to do the research yourself into moon products. I use this tool to tell me what I can make with the resources available to me: Reaction Materials Info Page. One of the most important factors to your profitability is what you can get for free. That means asking yourself "which moon resources, no matter how cheap, can I get a hold of?" Once you know that, you'll be further on the way to deciding what to produce.

The thing about POS's, is that you want to keep the raw number of POS's to a minimum. A large POS is the standard for fuel counts. Mediums take half the fuel of a large, and smalls take a quarter of a large's fuel.

So why does it matter if I use 4 smalls or one large? Lets look at the numbers for a Caldari Large, Medium, and Small Tower. These numbers will assume your alliance has sovereignty on the system in question(Which reduces the fuel costs).

Pay special attention to the Robotics, Enriched Uranium, and Coolant numbers. Oh, and use this tool to plan out your POS setups.

You'll notice that the numbers don't scale down the way you'd expect. That's because EVE is pretty unforgiving in rounding. That and the fact that you can't use less than 1 robotics an hour. 4 Smalls actually cost a significant bit more than 1 large(Since, besides Isotopes, Robotics is the single largest cost associated with fueling), while the capacity of the POS's in CPU and Powergrid aren't increased at all. You can do as much on 1 large as you can do on 4 smalls, but pay less to do it.

There are a number of applications for smaller towers in EVE, but for complex reactions, it's almost all Large Caldari POS's.

So now you've decided on the POS to use. You'll generally want to run POS pairs for less complicated complex reactions. Sylramic Fibers is one of those, so we'll talk about why a POS Pair is a better choice than just one POS.

You produce 2X the profit. If you want to just do a complex reaction from entirely bought simple reactants, a single POS is fine. You'll make more money, and find it much easier to use available resources though, if you do the simple reactions as well. I'm going to provide you with an image, that should help somewhat in explaining this. 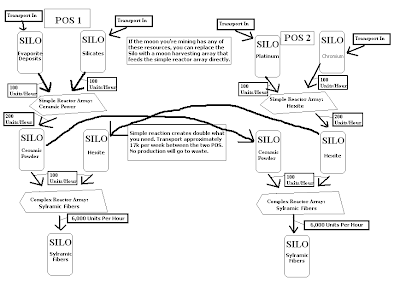 It's pretty complicated, but the information is all there. So each POS needs at minimum 3 Silos, 1 Complex Reactor, 1 Simple Reactor, and a choice between 1-2 Moon Harvesting Arrays and 1-2 Silos. If you're really very lucky, you'll get two moons in the same system with all of the resources you need. Otherwise you'll be stuck with the setup as displayed in the image. This is usually still profitable(check your numbers) but not always. So be careful.

So I'll explain the setup in words alongside the picture.

POS 1 and 2:
Transport 17k Ceramic Powder from the First POS to the Second POS, which is producing Hexite instead.
Put the Ceramic Powder into a Silo.

POS 2 and 1:
Transport 17k Hexite from the second POS to the first POS, which is producing Ceramic Powder instead.
Put the Hexite into a Silo.

After a week, come back, pull out all the Sylramic Fibers and transport the stuff across POS's again.

After a month, what you have should pay for the POS fuel for the next month, with some profit besides. Here's a link to the POS setup(Note, you will need two of these). And yes, you've got 500 CPU free. Enjoy putting up a lab on one, and a few production facilities on the other if you'd like.

Here's a link to a spreadsheet with current prices(As of this post).

There are many other methods and ways to do this. There is no one way to handle it. You'll have to figure out what works best for you. This should get you started though, so enjoy.
Posted by Hallan Turrek at 11:42 AM