C&P's Good Deed For the Year.

This led to quite an interesting thread on C&P where Chribba asked for help. I have never seen a collection of ner-do-wells rally behind someone quite like they did for Chribba.

Epimithius09 is the guy in charge of the corp that decced Chribba. Prometheus09 is his main. He's also a member of I.M.M, which is a member of Systemic Chaos. The shit's already hit the fan for my friend Prom though, as he was told clearly he is no longer welcome in Systemic Chaos, and apparently I.M.M isn't welcome there either. It seems a fair reaction though. If I ran an alliance and someone led this kind of trouble to my doorstep, I'd likely do the same thing.

The actual pos defense was pitifully easy. Our logistics blotted out the sun. When they finally deigned to poke a few of our ships(and honestly, with everyone there, they decided the Noir guys were a good target?) we came back and murdered them. That kinda ended their op. I got on a bit after it'd settled and contributed to the presence we were keeping on his PoSes. I put my Osprey out there, activated the reppers, and then waited patiently for them to try again.

Zedrik Cayne did a post on some of the chatting that went on while we waited. Nothing interesting really, but I did some talking.

So as it stands now, a group called Local Threat has declared war on Chribba as well. They've got about ten times as many members as CPR did(with a 1:7 K:D ratio... heh). Noir is a bit busy doing other stuff. Oh and CPR joined Privateers alliance, giving them a bunch of free war decs. Privateers has announced it's plans to dec Systemic Chaos. Fun times for Prometheus.

Chribba also paid for us all to have medals. Here's what mine looks like: 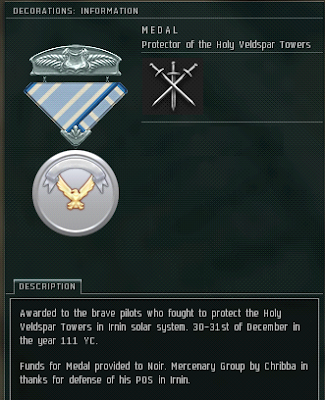