Well, the rain exploded with a mighty crash,
As we fell into the sun,
And the first one said to the second one there,
I hope you're having fun.
Paul McCartney and the Wings - Band on the Run
So I've always been one to try out weird and crazy stuff. One of the things I've always wanted to try in Eve was to approach the surface of a star. Well yesterday I did just that. Now there's nothing really special about it, it's been done. People've also bounced right the heck off of them too. I approached it and realized something. When I got under 100km, I could use the "look at" command. You can do that with planets too, but they're not nearly as spectacular. 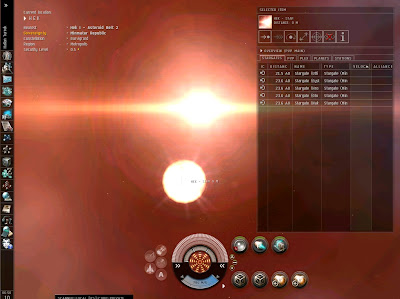 Notice anything odd about it? The part that you see in space, and the actual model of the star are actually totally different parts. Some things you can only learn by trying it out.

Oh and yeah, it took about 16 hours of flying or so to get close enough. But I had to know.
Posted by Hallan Turrek at 12:01 AM