Till You All Just Disappear 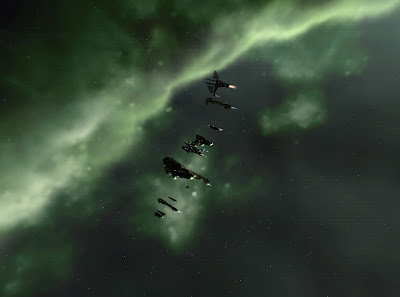 Pirate fleets are always quite a sight to behold. Flash, Shae, Mynxee, Sarge, Jed, and myself along with a huge group of Bastards and assorted other pirates went on a rampage through null and low sec space. By the time we were done we'd even streaked a path across high sec. It was an ultimately fun and productive roam.

I woke up and jacked into the corp comm channel while enjoying a morning drink. I was amazed to find massive amounts of people online and the plans for a roam being discussed. I hopped into my Rifter in anticipation, but after looking at the fleet I decided to try something a bit different and got into my Caracal.

We headed towards the first null sec gate and encountered a couple of ships. They made a couple of really poor choices and became the first victims of the night.

The first null sec gate itself was then clear but we had some fun with a few ships that warped in at a range that left them exposed. A Taranis was tackled and I managed to take it into half structure before it warped away, despite a Falcon's presence. I switched to the Falcon but it managed a jam cycle finally and I cursed. The rest of the ships managed to escape. The rest of the fleet held position and we began to move again.

A Brutix was tackled and taken down along the way, melting beneath the onslaught of our fleet.

We began to dodge in and out of null sec, finally catching a small fleet on a gate. The Huginn, Myrmidon and Tempest were left alone by their already scant backup to meet their fates. We had alot of fun spoiling their day.

A couple of people were being chased by a Vagabond while trying to get to us. We saw him on a gate and the entire fleet warped towards him. As we were about to land we heard on comms that he'd agressed, and the gate crew wouldn't let him through. Laughs were had at his expense as twenty ships came out of warp in unison and quickly destroyed him.

We finally dived headfirst into null-sec and began to make our way across Red Alliance, Goonfleet, and Intrepid Crossing space among others. We cut a path through The Great Wildlands and a few other pirate controlled systems as well, finding a Goonfleet base along the way that was unprotected. After destroying a few frigates and stealing some things off a Badger Mk II, we left it and continued on

We managed to nail down a Typhoon before we left null sec, and we emerged unscathed(save a Rifter loss by someone other than me).

We emerged in Konora and intel told us we might find a target on a station. A few folks had already decided to leave before we'd resurfaced, and took the opportunity to do so. We still managed to hurt a Taranis who made a couple of bad dance moves outside of the station. I was almost pleased to hear "I missed, someone else get him," as my missiles struck and the poor Inty exploded. I so seldomly get be the last to fire at a ship.

Myself, Mynxee, and a few other fleet members decided at this point to break what had turned into a Thanatos, Nidhogger, Raven, Claymore, and Purifier. We even heard tale of a Heavy Interdictor as we undocked and broke for high sec. We'd all taken alternate routes, and a few folks ran into trouble in null sec, while the high/low route was entirely clear. Everyone made it back in one piece except for Sarge.

You hear about pod malfunctions sometimes, and I've yet to have it happen to me. But basically it's when your pod blanks your brain and transmits the data away without your pod ever being breached. Sarge had this happen to him and his Tempest died afterwards. We were mostly happy to have him back, but he's likely going to sue the cloning company for the damages.