Well, if you go when the snowflakes storm,
When the rivers freeze and summer ends,
Please see if she's wearing a coat so warm,
To keep her from the howlin' winds.
Bob Dylan and Johnny Cash - The Girl From North Country 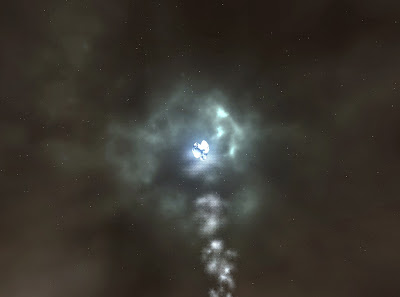 I had quite alot of fun last night with comet projectors along with a few members of my alliance. It's a novelty I know, but it's fun to fling them around this time of year. Celebration day may be past, but it's never to late to have some fun with your friends. 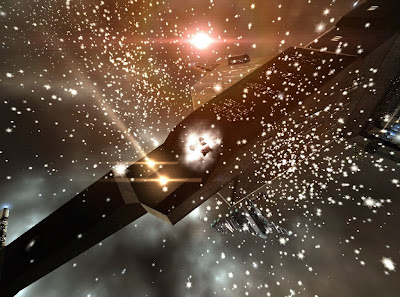 That said, I went on quite a long roam with Mynxee and MatarRae. Matar's a new Hellcat that's been wandering around Evati for the last few days with Mynxee. I gotta hand it to Mynx, she tends to bring in some good pilots.

I managed to get my own fool self caught at a gate. For the first time ever I got caught aligning my Rifter. All night the ship'd been sluggish in response to my commands. I'll never know what was wrong with it because a few interceptors made spare parts out of the damn thing. Mynxee and Matar were kind enough to wait for me to get into a new ship and we continued on.

Unfortunately the interceptors decided to follow our little roam a bit further down the pipe, and I suggested we divert from the normal path. We did so and lost the tail. We were wandering a bit in another branch of low-sec for a while before we returned to the pipe. We went into Amamake and for about ten minutes could not find a target. Not even a trap to spring. We decided to move on.

Sadly for us Matar had to head back about halfway to our next waypoint, but Mynxee and myself continued on. We continue into Vitrauze. I used to live there for a short time, and Mynxee had based the Hellcats there at one point, so we reminiced with the locals a bit while Mynxee sorted some inventory.

So far the only targets available had been to elusive to nail down. After arriving in Old Man Star we were surprised to find that hadn't changed. We flew around a bit but couldn't find anything. We decided to head up to Tama, a place I've visited on more than one occasion, before returning to Evati. Along the way Mynxee spotted a target.

"I've got a Kestrel and Catalyst in a Minmatar Installation," she said as I was about to activate the next gate.

I turned my ship back around and met her at the entrance gate. She engaged the gate and I did as well, but it took me a bit longer to get through. As I landed I saw the Kestrel warp away. The Catalyst however had decided to test his chances and Mynxee's Rifter sped in his direction. I did my best to catch up. She started to engage and as I closed I saw both of them going down fast. Mynxee's ship went up in a orange flare as I reached the target, already at half structure.

He popped before he even got a shot off, and I hammered the pod with all my ordinance even before Mynxee managed to yell on comms, "Pod him!" I scooped the loot from both wrecks and waited out my Global Criminal Countdown, as Mynxee mentioned she had some ships in Tama to replace her Rifter with.

In Tama we accosted the locals and threw out a few hellos. Mynxee managed to convince another pirate in the area to come down to Evati with us. They hopped into Stabbers and I hit the gate in my Rifter. We sped through high and low sec even past Rancer, which at the time was empty of the Smartbombing battleships I normally expect. I did take note of the Crielere labs along the way. 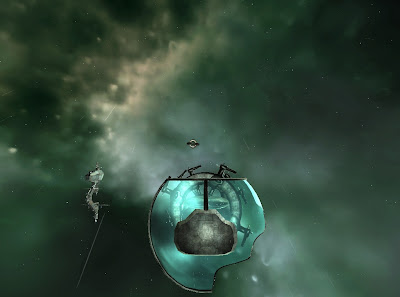 I have no doubts that if they were not Research Outposts, the two stations would be firing at each other daily.

Back in Evati I wasn't sure what to do. I'd had a pretty full day already, but I was interested in the fleet that seemed to be forming around Mynxee. I have to give the girl some credit, if you want a fleet organized, she's the best one to get it done. Not many people can tell her no.

With quite a little fleet under our belts we decided to set out. Somehow I got voted as the squad commander and I set our destination as Katugumur. Mean Coalition's home.

The trip was rather uneventful but the Katugumur gate was camped by a Deimos, Abbadon, and Hurricane. We all broke the gatecamp and formed up in the system. After a bit of hunting and chasing shadows Mynx volunteered to be bait. She took her new Rifter into a belt and began to shoot. I had the rest of the fleet align to her and we waited. True to form, the Deimos and Hurricane jumped in to kill her. The rest of the fleet were on them in moments, and I managed to warp to the wrong belt. I called the Deimos as primary without even being in the battle and the fighting commenced. As I arrived I started shooting the Deimos, who was at about half shields.

I asked if anyone had a point on the Hurricane and someone volunteered to do it. The Hurricane was pointed and the Deimos began to melt. Someone said they were removing point for the pod and I told everyone else to burn for the Hurricane as soon as the Deimos popped. The Deimos pod managed to warp out as the pointer accidentally moved out of range, but we continued to engage the Hurricane who soon too met his fate. I designated looters and had everyone else warp out. It was a quick affair, which was to be expected when in enemy territory.

The trip back to Evati was mostly uneventful, with a few ships trying to chase us down. We could've taken them as a group but I wasn't taking chances. Eventually they stopped pursuit and we made it back to Evati with loot in hold and everyone else intact.

Then we had another snowball fight.

Good Day.
Posted by Hallan Turrek at 4:00 AM