Another update this week, just to participate in Spectre's giveaway.

Spectre said: Create anything that publicly expresses something about me. Anything. I don't care if it is a billboard in San Diego that calls me a fucking jackass. 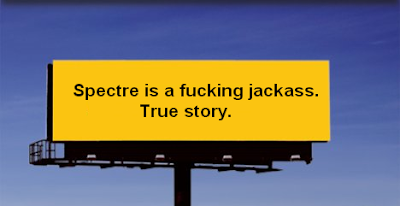 Spectre said:I don't care if it's an essay about how I have saved your marriage.

My wife used to let her mind wander in bed. We'd be making love, and suddenly she'd just stop paying attention. It got pretty bad for a while, and I was sure she was having an affair. Turned out she was just not attracted to me anymore. So I showed her a picture of Spectre, and BAM. Apparently in comparison, I'm not so bad. Thanks Spectre.

Spectre said: I don't care if you draw a picture on a napkin and upload it to Flickr.
I uploaded this to Flickr.

Spectre said: Hell, you can even just write a haiku

I have to tell you.
Spectre screwed your mom last night.
That's right. I said it.

Repeated over guitar that is way to loud seventy-three times.