Blog Banter: You'd Rather Be Playing The Sims, Right? 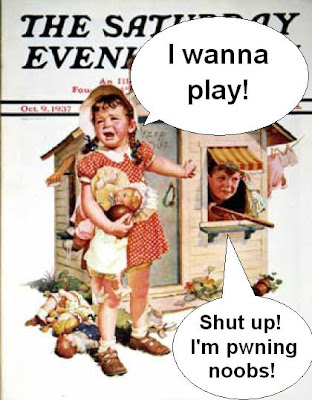 Welcome to another installment of the EVE Blog Banter, a recurring EVE Online blogging extravaganza created by CrazyKinux, which invites EVE bloggers to address a common topic for a period of one week. Posts run the gamut: short, long, humorous, serious, and everywhere in between, but always fun to read!

This month's banter comes to us from CrazyKinux himself, who asks: "What could CCP Games do to attract and maintain a higher percentage of women to the game. Will Incarna do the trick? Can anything else be done in the mean time? Can we the players do our part to share the game we love with our counterparts, with our sisters or daughters, with the Ladies in our lives? What could be added to the game to make it more attractive to them? Should anything be changed? Is the game at fault, or its player base to blame?

Bit odd isn't it? Feels kind of sexist to go out and say "Oh but wait until Incarna comes out, then they'll have something to do," That's because it is. It's one thing to say that women prefer a social game to exploding things. It's quite another to say that they only want a social game.

Our society is how it is. Women like to talk, men like to not talk. It's ingrained in you while growing up. It may not've been the way you were leaning, but it's how you're programmed.

There are a huge number of barriers to enjoyment in Eve, but those barriers apply equally to men and women. So throw those right out.

This game has a bigger social scene than any other game I can imagine. It's ingrained into the very fabric of how we play. Standings, Diplomacy, Chat Window upon chat window, mailing lists, Eve forums, corp forums, alliance forums, leadership of corps and alliances, wars, peace, even the scams... and I could go on.

Only none of Eve's marketing mentions that.

"Get engaged in massive wars on a giant scale,"

This game markets exclusively to male gamers. I enjoy pretty explosions. I've always wanted to fly a spaceship. Some chicks do too, but they're going to play the game that markets directly to them. For now, that's WoW.

Fix standings(give us a diplomat role instead of only directors) in an expansion and do a trailer about diplomacy(maybe Incarna style). Do smart marketing. Talk up the talking game. Women make up 62% of the online gaming community. That is a huge untapped potential. They'll come for the friends and stay for the pretty explosions.

I mean who doesn't love a pretty explosion...

Posted by Hallan Turrek at 3:10 AM