London calling to the faraway towns,
Now that war is declared-and battle come down,
London calling, to the underworld,
Come out of the cupboard, all you boys and girls,
London calling, now don't look at us,
All that phony Beatlemania has bitten the dust,
London calling, see we ain't got no swing,
'Cept for the ring of that truncheon thing,

The ice age is coming, the sun is zooming in,
Engines stop running and the wheat is growing thin,
A nuclear error, but I have no fear,
London is drowning-and I live by the river.
The Clash - London Calling 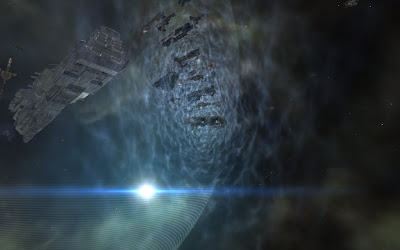 Lets get the links out of the way first.

Our Campaign.
Prometheus's Blog. (He covers Noir's insertion op very well)
Ombeve's Blog.
Kirith Kodachi's Blog.(For a CVA friendly perspective)
Mynxee's Blog. (No updates on this yet, but I imagine one is forthcoming)

Now, onto the topic for discussion!

The Providence invasion has begun. Anyone paying attention to Providence will recognize that 3/4 or so of the station systems have been reinforced. This is, in a way, AAA calling CVA's bluff. CVA expected them to get bored, and instead got almost all of their systems sieged at once. Good job CVA.

So why is Noir involved? I'll let you figure that one out on your own, but here's some hints.

This is map of Provi with our currently occupied systems highlighted. Bonus points if you look at the map with kills in the last 24 hours showing.

Much like Daisho Syndicate, Sodalitas XX, and Agony Empire(so called "Provi Block" alliances) we are focusing on a single constellation, and we dropped the SBU's to contest the system. Draw your own conclusions.

I do know this though, the Provi Block is going to grow a bit before the week is out.

What I find oddest in all this is that CAOD hasn't had a post on this yet.

More on this next week.