Photos From The Wasteland

To live and not to breathe,
Is to die, In tragedy,
To run, to run away,
To find what you believe.
Green Day - Jesus of Suburbia
I got bored. I also figured if I kept up at the pace I was going, I was never going to get through with this. So I took about 4 hours and went from Outer Passage to Fountain. I hit every region along the way. Here's a photo dump: I snapped at least one quick picture of each region(I forgot to snap one in The Spire though) along the way. It also includes all the images I'd taken so far. I've hit every region in Eve now, and been as far north, south, east and west as you can go.

Here's the fit I was using as well. I should have loaded SOME weapons on it, and it was stupid not to. I realized that about 5 minutes after I got into 0.0. If I wanted to try a speed run I'd skip on the Stabs and go full nano, then rig it for warp speed. Same align time(3.9), almost double the warp speed(from 3 to 5.9 with T2 rigs). Honestly I probably should've done that anyway.

Now that that is over with, I've put my Tengu up on the market. 300 million ISK in Jita, by the way. Pretty good price.

Oh, and all of you with assets all over the place. Suck it. 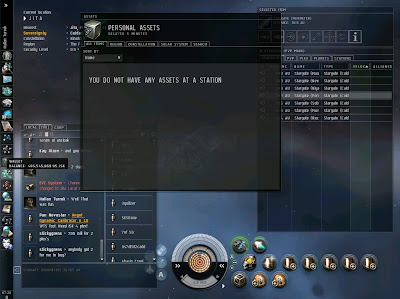 I bought a shuttle and now it's time to get started on finding a corp, or recruiting for my own. I've got a couple of ideas knocking around in my head still.

I definitely want to join a giant alliance, eventually, but with Incursion coming, I think I want to stay free to deal with the Sansha storyline on my own. This is the part I'm not sure about. There are corps out there that're already set up for doing this. Do I join them, or work with them while building up a corp? Choices!

I've got some time to think about it though, so I'll come to a decision eventually.
Posted by Hallan Turrek at 12:16 AM