That watch costs more than you car. I made $970,000 last year. How much you make? You see pal, that's who I am, and you're nothing. Nice guy? I don't give a shit. Good father? Fuck you! Go home and play with your kids. You wanna work here - close! You think this is abuse? You think this is abuse, you cocksucker? You can't take this, how can you take the abuse you get on a sit? You don't like it, leave.
Blake - Glengarry Glen Ross
A while back I showed you a picture of the currency exchange that demonstrated money spent, and then consumed by the CCP monster. It turns out that I was a little off. I've had a chance to take a look at the new noble exchange store, and I've changed my mind considerably. So here's a new image that helps demonstrate the currency cycle in EVE just a little bit more effectively. 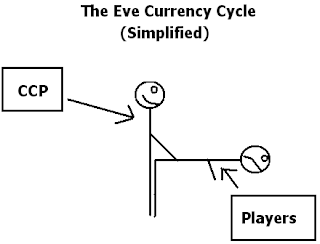 So who's ready to start buying clothes for their avatar ingame that have similar costs to the same clothes in real life?

Lets compare a men's dress shirt in eve to the same dress shirt elsewhere. Quoting from Riverini's post on EN24:

17 bucks for a dress shirt for your Avatar. Neat. How much would a dress shirt actually cost me down the street?  11 bucks at Walmart. I would link it but that seems like free advertising for them, and I'm not cool with that.

When ingame items of similar use for your goddamned Avatar cost you more than the actual item in real life... something's fucking wrong there.

Who wants to go out and buy a 62 dollar monacle? If this accurately reflects the costs of developing this stuff, everyone who said CCP was wasting our time with it is absolutely correct.

So why in the world would CCP premier their items with such high costs? I can only assume the idea is to start with impossibly expensive items, get a few suckers at that price, and then lower the prices later(but not down to a reasonable price, just reasonable in comparison). It makes good economic sense for them to do that, but this is blatently screwing the playerbase.

I've read and re-read the original dev Blog by CCP Zulu, and you know what? I want to know who was lying to these people. I've yet to meet anyone who wanted this. A random "hey it might be cool if one day," here and there sure. But not "OH MAN I CANNOT WAIT UNTIL I CAN DRESS UP MY CHARACTER IN SPECIAL CLOTHING".

Since they've announced, there are plenty of folks that say "It's not so bad," and "It might be cool" but not anyone who thought "GOD DAMN IT I WANT A CUSTOM SKIRT ON MY FEMALE AVATAR,". If they think the average eve player wants more clothing on their characters, they do not know their player base as well as they think they do.

I'm often one of the ones who'll come out and say that things are not as bad as the doomsayers and bitter vets say it is. CCP, you make my job harder when you come out with a 62 dollar monocle. This is like that last slice of pizza: you might not want it, but it's there, so you kinda want to try it. I thought to myself, "Fine, I'll convert one plex and buy an outfit, I like the game enough, and RP enough, and want to try this new content out enough to do that,".

I'd ask CCP what the point of this was? Is it money? Fuck you. I already pay for this game, and I was more than willing to drop just a little bit more on your "Princess Barbie Playhouse" bullshit. Emphasis on "a little bit". Not a quarter of my goddamned paycheck you giant assholes.

Since I can't really throw the finger up to this giant pile of horse shit, I'll do the next best thing. Turn it off. I'll also show you how. Uncheck the box that says "load station environment". 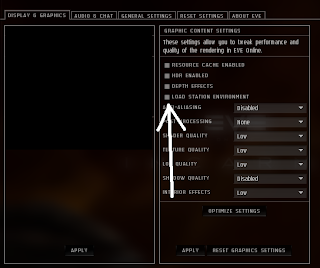