Fiction was invented the day Jonas arrived home and told his wife that he was three days late because he had been swallowed by a whale.
Gabriel Garcia Marquez
Catch and Providence.

I'll apologize that this time around the trip was way more interesting than the pictures I took. I dodged 3 big gatecamps before I made it to HED-GP. I was lucky to have the interdiction nullifier for them, but the bad part was when they started following me. Say what you want about the T3 cruisers, but with a warp speed of only 3 AU's a second... it's pretty easy for people to catch up to you in a pipe. By the time I made it to HED-GP at least 50 ships were in hot pursuit(if local counts were any indication), with quite a few more lagging behind. I'm not sure what they thought I was there for... hot drop perhaps? I was fortunate enough to get into HED-GP a system ahead of the fleet.

I warped quickly to the Keberz gate and took this picture. 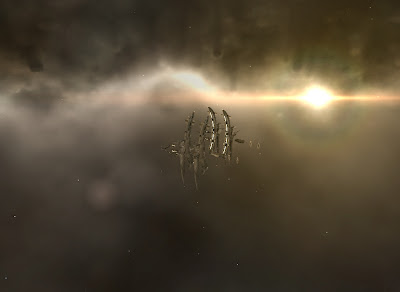 Sorry for the lack of quality, but I was in a bit of a hurry. I turned my ass back around immediately, and warped to a safe. No local spike. What does that mean exactly? Did they give up? Unlikely. So I decloaked, and warped to the Keberz gate at 70. I gave any scouts they had a nice look, before cloaking up again. Sure enough, local spiked. Then I warped to the SV5 gate. I landed just in time to see the tacklers dissapear into warp. I jumped through, but the only thing waiting on me were battlecruisers and some logistics. Away I went, unmolested.

I took one quick jaunt into another battleground, Providence, and took this picture of Chribba's new station in 9UY. 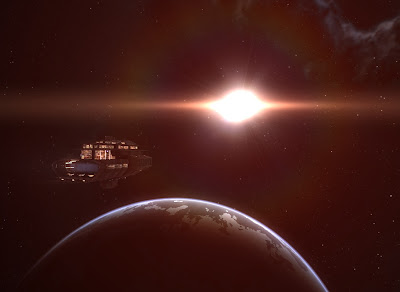 Next up, Impass and Tenerifis!
Posted by Hallan Turrek at 12:01 AM