See to them, you're just a freak. Like me!
The Joker - The Dark Knight
Jedziah, Snaptz, Sarge, Kulmid, were already preparing for a Hauler roam and invited me along. I couldn't possibly give up such an interesting concept and away I went. I loaded up a battle Badger Mark II and was on my way. Fifteen jumps through high sec later, while flashing, I was in the low sec meetup system. 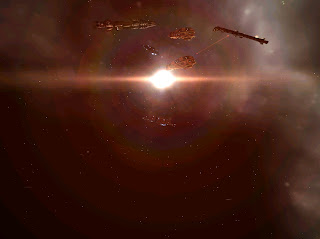 After shooting at each other for a bit we were on the way.

We warped into G-5EN2 and almost immediately a Vagabond piloted by Habk came through.

It was no dice, so we decided to move on.

9-F0B2 was somewhat less exciting to start with, but that was soon remedied by an Arazu, Rifter, and Rapier coming through. The Rifter sat off the gate quite a ways, and the Arazu and Rapier jumped through. We waited a bit and finally the Arazu came back. We started to kill it.

At this point I should mention that everyone else started trying to kill it. I was one of only two non sensor boosting ships involved, and my Badger had a 40 secound lock time on that Arazu.

I got about 20 seconds into a lock when the Arazu either damped me or went out of my range. Regardless my lock failed and I was forced to try to reapproach him. I got in range again and tried a lock. I was five seconds away from a lock with my guns primed when he popped. Just as it happened, Vercingetorix died in a Mammoth and the Rapier was apparently not very friendly to the Arazu as he managed to get onto the killmail a bit.

After scooping a true sansha warp disruptor, we moved into the next system and into a huge gatecamp.

And we did die, gloriously.

My lossmail is only half the story, check the engagement on the AAA killboard.

It was quite a blob for haulers.

Still a good day.
Posted by Hallan Turrek at 7:17 PM

Email ThisBlogThis!Share to TwitterShare to FacebookShare to Pinterest
Labels: Piracy