'Cause you are not alone,
And I am there with you,
And we'll get lost together,
Till the light comes pouring through,
'Cause when you feel like you're done,
And the darkness has won,
Babe, you're not lost,
Michael Buble - Lost
Most of you have already heard the news. I'm glad to say I didn't know anyone on Seyllin One. For so many to die so quickly, it's almost unthinkable. I took the time to trek to the dead world. 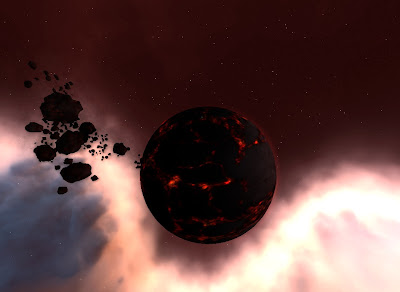 The wormholes that've appeared all over New Eden are the most likely culprits. I've a working knowledge of astrophysics, enough to know that it's likely that a wormhole opened up near Seyllin that connected to the interior of a star. A bit of bad luck and that could've happened in where I live in Evati.

The best thing to do in such a situation is to get back to living, so I hopped into my Cheetah. I proceeded to hunt down a Radar site in Todifraun. After ripping off the Angel Cartel for about twenty million isk, I started running my probes again. In Akkio I found it. 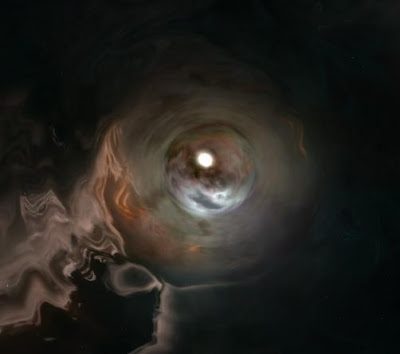 I could not resist the urge, and traveled through. I came out in unknown and unexplored space. A ringing alarm that I'd never heard before started as my ship sensors adjusted. As my systems came back to life I checked the alarm. It was a gravitational anomaly alert. A black hole was only a few light years out. 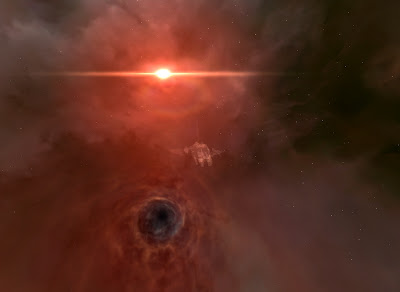 I warped to a planet and made a bookmark between. I then doubled back to my bookmark and deleted it. Then I warped to another planet, repeating the process, but renaming this bookmark as a safe spot. I released four probes and cloaked.

I made sure to deactivate three of the probes, and took the other out to start my process of searching.

Very shortly I found an asteroid belt with some strange signatures coming from it. I order my Cheetah to warp to the location and the strange readings became stronger as I approached.

A sense of dread filled me as I came into visual range of the asteroids.
Posted by Hallan Turrek at 8:00 AM