Welcome to the thirteenth installment of the EVE Blog Banter, the monthly EVE Online blogging extravaganza created by CrazyKinux. The EVE Blog Banter involves an enthusiastic group of gaming bloggers, a common topic within the realm of EVE Online, and a week to post articles pertaining to the said topic. The resulting articles can either be short or quite extensive, either funny or dead serious, but are always a great fun to read! Any questions about the EVE Blog Banter should be directed here. Check out other EVE Blog Banter articles at the bottom of this post!

The first banter of this 2nd year of EVE Blog Banters comes to us fromZargyl from A Sebiestor Scholar, who asked the following: On the EVE Fanfest 2009 page are pictures of prizes for the Silent Auction that was held during the event. One of these photos was entitled “Design your own EVE mission”. My question now would be what kind of mission would you write if you got that prize? What would the mission be about? Would it be one using the new system of epic mission arks? What would be the story told by it? Feel free to expand upon his questions and put together your very own mission!

"Hallan! We were looking for you," Orvyllerier Allerande, Guristas Agent, said with a smile, "We've got a problem. The Cartel came for a visit a few days back," Hallan leaned onto Orvy's desk and grinned. Orvy continued to speak, "Yeah, don't smile, we had our fleet dealing with a fucking 0.0 alliance, and they managed to get some troops onto the station before we called the fleet back to deal with it,"

"Ok," Hallan started, "So what, you want advice on how not to get fucked in the ass now?"

"Shut the fuck up. They left us a message," Orvy rolled his eyes and picked up a datapad, "This mission comes straight from the Rabbit. You already know that fucking with the old man can be hard on your health, but Rabbit is a close second when he's angry," Orvy hit some keys on the datapad and handed it to Hallan.

Hallan tried to suppress a laugh as he looked at the image, "Not exactly subtle is it?"

"No it ain't," Orvy cleared his throat and continued to speak, "I've already uploaded the location of the nearest Cartel fleet. Go out and give them a message from us. Make sure it isn't subtle either,"

"They wasted a fleet and what I imagine was a fairly large boarding party just to leave this message?" Hallan said with a raised eyebrow.

"Hey, I never said they were smart. Get out there and don't come back until you've killed some members of the Cartel," 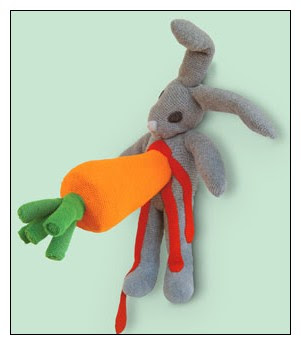 Posted by Hallan Turrek at 3:28 AM