For the World Is Hollow and I Have Touched the Sky
Star Trek: The Original Series
So, you saw in my Monday post that I've started Ninja Salvaging. Currently I'm operating in a system that's between two level 4 hubs, and has no stations. So most if not all of it's inhabitants are running missions. But even then, how do you pick mission runners out of the hundreds of people in a mission hub? With 10 or more people sitting on a gate or station, and a constant influx and exit of people, you can't really do a scan and ignore like you can in low population systems. What's the trick here?

Well, I don't know how other people do it, but I gave this some thought and came up with a solution.

First of all, you set your probes up in this pattern: 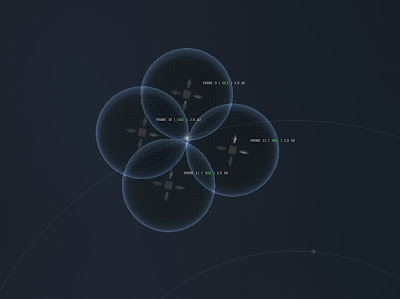 Notice how it's almost a normal scan pattern, but in this case, the probes are spread out more, so the center cross section is tiny. Now, move your probes so that the planet/station/gate is in the very center of your probes, like in the above picture.

Here's another view that may help ya out: 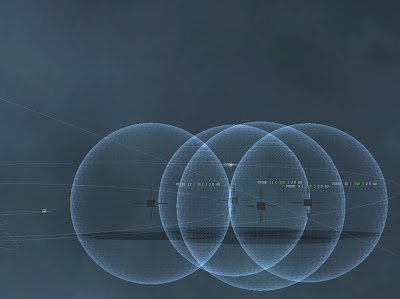 See how the bubbles rise above the planet, but the planet itself isn't inside the radius? That's what you want. Now you just run a scan. If it turns up something, take note of the ID number, and keep looking for it. If this doesn't work, move your probes to the other plane of the solar system. In this case, we scanned below the planet. Lets scan above as well. 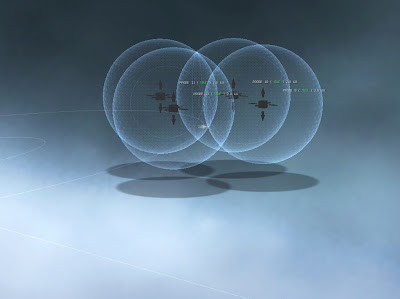 Bam. It's slightly more complicated, but it does the job. I'm sure lifetime ninja salvagers have their secret ways to do this a bit better, but this is working pretty well for me, so I'm cool with it.
Posted by Hallan Turrek at 12:01 AM