Sleep Now In The Fire

"You think that life is nothing but not being dead? It is not the bread and water I fear. I can live on bread. It is no hardship to drink water if the water be clean. But to shut me from the light of the sky and the sight of the fields and flowers; to chain my feet so that I can never again climb the hills. To make me breathe foul damp darkness, without these things I cannot live. And by your wanting to take them away from me, or from any human creature, I know that your council is of the devil."'
Saint Joan of Arc
I am free.

I had a discussion today with a childhood friend. He said he didn't understand my drive to pirate. I told him, "A good sword needs a little heat to be strong. Think of me as the fire."

It's true. A capsuleer who never loses a ship ain't makin' full use of his abilities. I'm there to provide object lessons in why whatever they were doing was wrong. If I make a bit of isk from the lesson, so be it.

He was unconvinced and I cut the vid-phone's connection. I have freedom, and that' s enough.

So, I left Evati today and headed towards Amamake. I wanted to fly there without using the nav-computer, given that I may need to get somewhere fast in the future. After a few missteps, I was there.

I sat in the middle of the system for a long while really, amazed at the lack of activity in what is traditionally a deadly system. That's when I spotted the Caracal. Now, one little bit of information for those of you who don't pirate every day: If you see a single ship in a very active system, he's either stupid, looking for a fight, or it's a trap. I was betting on trap as I warped in on him. As my ship entered warp I spotted a Harbinger floating around as well, but not ahead of me, so I continued on.

I saw the Caracal as I entered the belt. My ship dropped out of warp inside my scram range, I immediately targeted the Caracal and began to fire away. I kicked on my afterburner and pulled into a tight orbit, and my shields held up remarkably well against his heavy missiles. I was liking my chances as he hit half shields. Then, and only then did he activate his own tackling gear. I was hoping he didn't have a web on him, but sadly he did. As my ship slowed down to less than half my speed, the missiles started to have an easier time with me. I turned off my own web to conserve cap and he began to burn away from me. I was forced to turn my own web back on or allow him to escape. We actually hit structure at around the same time, oddly enough, which I saw as a positive, but my cap was bottoming out, I was turning on my repper as I got cap, and had to reactivate my various modules periodically.

Then the Angel Cartel frigates warped into the belt. It wasn't a serious problem under normal circumstances, but we both knew they'd turn the tide of this battle one way or the other. Only I knew that his chances were better at that point. He could stand one of them hitting him, I was at my breaking point, and even if only one of them targeted me, I was going down. I got a rep cycle in at 80% structure, and watched his structure drop to 60%, then the locks of the Cartel frigates resolved. He got one and I got one. Not the worst scenario for me, but probably enough. My afterburner failed, as did my web. Scram and damage control stayed on. My structure was seriously hurting, I got a repair cycle in periodically, but I was pretty heavily on fire. I turned everything back on and kicked the armor repairer back on at exactly 6% structure. One cycle went through but another volley of missiles smashed my ship into bits around me.

I once again, like I've done almost 50 times since entering low-sec, warped my pod away from the wreck of yet another rifter.

I'd like to take the rest of this to mention a friend of mine. You see, most of us pilots have good luck charms inside our pods. Mynxee has Mr. Pink, Spectre's got his fuzzy slippers, just to name a couple of examples. Enclosed inside a special diamond case attached to the inside of my pod, I've got a little thing I've had for a quite some time. 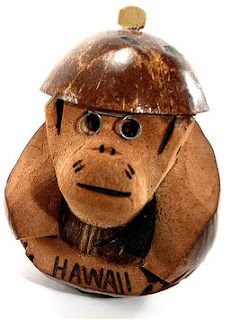 I've always held a special place for Choco the Coconut Monkey. Luckily my insurance policies include an exact copy of him to be delivered to my hangar with a single piece of tritanium inside. I'm still waiting for the day I'll have to give up my old childhood toy for a copy, but so far it ain't comin'.

Good day.
Posted by Hallan Turrek at 2:37 AM