I was quite thankful of that fact as I arrived and saw a number of strange ships flying around. They bristled with weaponry and moved at insane speeds. I just as quickly turned tail and ran back to the wormhole.

Unfortunately upon arriving I discovered it had dissapeared. I still don't know why. I dropped my probes and began to search for an exit.

After a few hours, another wormhole appeared. I entered. 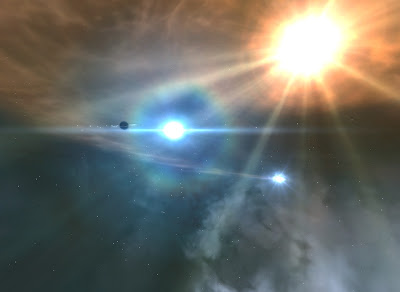 The system was amazingly beautiful, but still outside of known space. I was just happy to be far away from the monstrosities in the last system. I dropped probes again and began to look for a new wormhole.

Another few hours later, I found it and exited into known space. Into high security Amarr space. Twenty Six jumps from Evati.

I began the long but hurried trek home as faction police chased me from system to system. I finally arrived and sighed.

OOC: I'm particularly proud of that screenshot I took as well. Made it into a desktop background.
Posted by Hallan Turrek at 8:00 AM

Email ThisBlogThis!Share to TwitterShare to FacebookShare to Pinterest
Labels: wanderlust