When in doubt, make a fool of yourself. There is a microscopically thin line between being brilliantly creative and acting like the most gigantic idiot on earth. So what the hell, leap.
Cynthia Heimel

I had a feeling I wasn't the only one to figure this out.

There are a few of us pilots who've been keeping something from the rest of you. Nothing about it's abilities jump out at you when you're looking at it's stats. However a fair few of us have plugged it into EFT and found it to be an unrivaled frigate.

With an unheard of combination of speed, tank, DPS, and maneuverability: Say hello to the Dramiel.


Start with the basics. It's a cheap fit compared to other Dramiel fits you'll see floating around. While scrammed you'll still go 2500 meters a second. Overloaded it goes 3500 meters a second. It aligns with the Afterburner off at the insane speed of 1.9 seconds. It does the same at 3.2 with it on. If single webbed, you'll go 1000 meters a second while also being in scram range of the target.

It has a 7.5k EHP tank. That includes a 69.4% shield resist to explosive. Which covers the Warrior II's that you'll most likely see sent after you.

Oh and for the hell of it, why not 187 DPS? While that's not as great as a Taranis or Daredevil, it is impressive for a frigate, and that is on top of all the other things it does well.

It is, in my opinion, the ultimate frigate heavy tackle.

I managed to pick up two Blue Prints for 70 million a little while back. I built them and I've flown them, and I love 'em.

That said, get the Dramiel for one very simple reason above all else: It is among the coolest looking ships in Eve. Seriously. 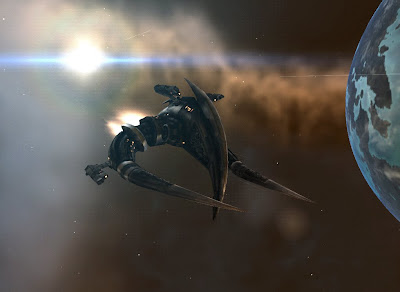