I want to glide down over Mulholland
I want to write her name in the sky
I'm gonna freefall out into nothing
Gonna leave this world for a while
Tom Petty and the Heartbreakers - Freefalling
So tonight I had quite an adventure trying to track a friend down and do someone a favor. Lets cover how it all began.

First I decided to head out to Vitrauze to sell off my belongings there. The ten million I made will be of much use to me elsewhere. After docking I went to check out a bar in the Federal Navy Academy. There was a particular waitress, who of course wasn't there tonight, who I'd been wanting to see again. She found me.

A ragged shell of a girl came up to me in that dingy bar and asked me if I could track someone down. She looked so helpless that I found it hard to refuse. I got her cleaned up, fed, and welcomed her aboard my ship. It was a mistake and wasted my time, but I'd do it again.

The person I was looking for was actually a friend of mine. She operated out of Evati just the same as I did, but was on a holiday. I had to find her.

Her last communication was from Dead End, and I figured that'd be a good place to start. Upon arriving there I found no trace of her, and moved back towards Vitrauze. As I did, a bit of intel came filtering in. A place out in null-sec called C9N-GC. I've barely ever ventured into null-sec, but I was determined not to dissapoint the girl that was surely pacing my ship at that very moment. Until a few jumps in, it was a fairly uneventful passage. Then instead of dropping out of warp at the gate, I was fifteen clicks away. I kicked on my microwarp drive and was jumping out as a single volley smashed into my shields. The ship barely rocked.

I passed by some Smuggler Gates along the way. They're of interesting design.

The remainder of the trip was completly uneventful until I arrived in C9N-GC. The system was completely deserted, and I keyed up a bit more info. In fifty jumps it had taken me to arrive she'd moved back to Evati. I cursed but discovered the wreck of a titan in system. I visited it. 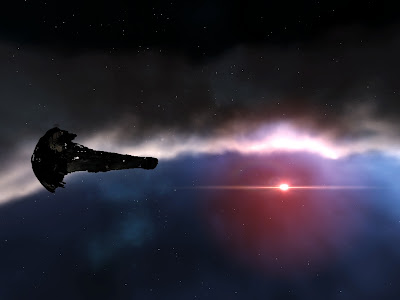 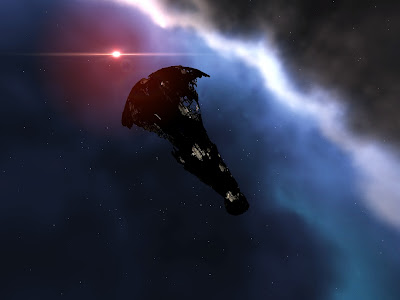 In AZN-DZ, which was an unavoidable obstacle on my trip home, I noted a larger number of kills and pilots on the galaxy traffic maps. When I warped in, I discovered a huge camp on the gate I needed to travel through. I cloaked up and waited. Shortly the fleet moved, and I passed through. It was a simple waiting game. The path was clear for the rest of my trip back to Evati until the final piece of null-sec.

As I came out of warp on the Paala gate in LXQZ-T, I was almost seventy kilometers from the gate. I kicked on the microwarp drive and burned hard for the gate. A Manticore and Crow locked me and managed to place a warp disruptor on me. From what I understand these folks are more used to people cloaking when they run into trouble, and were probably better prepared for that instance. I was burning over thirty-five hundred meters a second towards the gate and actually jumped out just as their first volley passed through where my ship would've been and smacked off the gate. They were likely angry as my lowly rifter ran their gamut.

The trip back to Evati was alot more subdued and finally I was docked. I told the girl to go on her way, that she could find my friend in that station any time now. She thanked me and walked away.

A hundred and twenty jumps to end up back where I started.